Former San Francisco 49ers quarterback Colin Kaepernick has been chosen as the face of a new Nike advertising campaign to mark the 30th anniversary of the company’s iconic “Just Do It” slogan, it was confirmed Monday.

Kaepernick, who triggered a political firestorm after kneeling during the US national anthem in 2016 to protest racial injustice, has not played in the NFL since early last year.

The 30-year-old is suing the NFL, claiming he has been frozen out of the league by team owners because of his activism.

The new Nike adverts, which were unveiled just days before the kick-off of the 2018 NFL season on Thursday, show a portrait of Kaepernick with the slogan:

“Believe in something. Even if it means sacrificing everything.”

ESPN reported that Nike had kept Kaepernick, who signed a sponsorship deal with the company in 2011, on its payroll throughout the controversy of the past two years.

Believe in something, even if it means sacrificing everything. #JustDoIt pic.twitter.com/SRWkMIDdaO

“We believe Colin is one of the most inspirational athletes of this generation, who has leveraged the power of sport to help move the world forward,” said Gino Fisanotti, Nike’s vice president of brand for North America.

The advert comes just days after Kaepernick was cheered by spectators when he appeared alongside fellow player and activist Eric Reid at the US Open tennis tournament to watch Serena Williams on Friday.

Kaepernick’s protests have become a bitterly divisive issue amongst NFL fans after President Donald Trump reignited the controversy during a campaign rally in September last year. 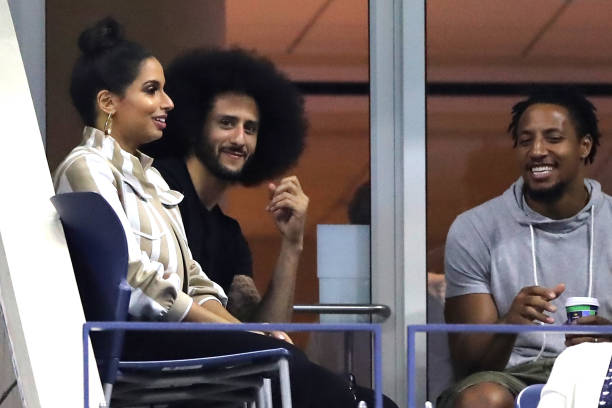 Trump described players like Colin Kaepernick who knelt for the anthem as “sons of bitches” who should be fired.

The US leader has repeated those criticisms frequently over the past year, even suggesting at one stage that protesting players “shouldn’t be in the country”.

In June, Trump cancelled the visit of the Super Bowl champion Philadelphia Eagles to the White House after several players indicated they would not attend.

Analysts have predicted Trump is likely to step up his rhetoric against protesting players in an attempt to rally supporters ahead of November’s mid-term elections.

Critics of Kaepernick, who have framed his protest as unpatriotic and disrespectful to the US military, took to Twitter on Monday to hit out at the Nike deal.

Some fans vowed to burn Nike goods, with the hashtag “JustBurnIt” trending alongside #BoycottNike.

However others offered their support to the ostracised quarterback.

“He did so not to disrespect our flag but to give meaning to the words of the preamble of our Constitution—’in order to form a more perfect union.’ Well done, Colin, well done.”

Nike’s sponsorship deal ensures the issue of the national anthem and player protests will re-emerge during the coming season, increasing pressure on the NFL to broker a solution.

NFL owners in May approved a new policy which made it mandatory for all players on the field to stand during the pre-match ritual of the US national anthem.

Players would be given the option of remaining in the locker room during renditions of “The Star-Spangled Banner” but would be fined if they did not stand while on the field.

However, the new policy was shelved in July as the NFL and NFL Players Association agreed to reopen dialogue to reach agreement on a new approach.