Ireland captain Rory Best will make his 100th international appearance on Saturday when he takes to the field to face a Wallabies side that will be gunning for their first grand slam of the northern hemisphere since 1984.

The 34-year-old will also become the first Ulsterman to join world rugby’s elite ‘100-cap club’, and to celebrate the occasion we’ve decided to highlight his journey thus far in an Ireland jersey to commemorate the hooker’s historic achievement. 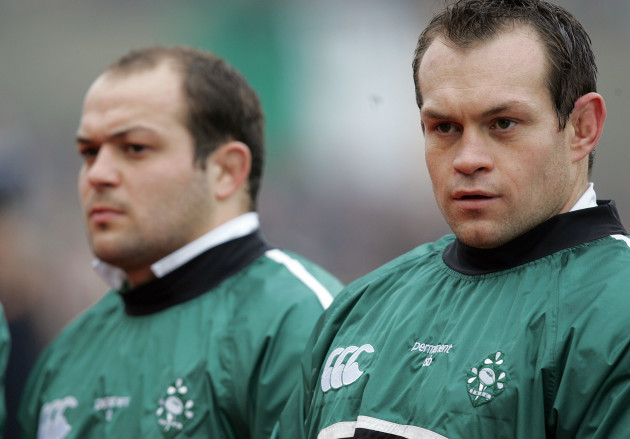 Best made his Irish debut off the bench alongside brother Simon in a 45-7 trashing by New Zealand at Lansdowne Road in November 2005. The 23-year-old hooker replaced Leinster stalwart Shane Byrne in the 76th minute of a blowout loss, in what was a rather forgettable afternoon for Ireland, but ultimately a tremendously proud day for the Best family.

The young rake would feature again off the bench for Ireland in the following week’s loss to Australia, but would have to wait another full year before he received his first start for Ireland against South Africa in 2006. Best would retain his place in the Irish pack for the following week’s win over Australia and would hold onto the number 2 jersey to start the 2007 Six Nations.

Best crossed for his first try for Ireland just two weeks after he received his first start in the win over the Springboks. Ireland were facing a Pacific Islanders side that had just lost back-to-back tests against Wales and Scotland, before enduing a 61-17 trashing in Dublin to round out their one-time tour.

Best scored the second last try of the game after running more than 50 metres to support substitute scrum-half Isaac Boss, who had just carved his way through the Islanders’ defence before popping the ball to Best metres before the line for the Ulsterman to score. Arguably the easiest score of his eight international tries. Ireland’s 2007 Triple Crown triumph marked Eddie O’Sullivan’s third in four years between 2004 and 2007, and while the 2007 campaign will largely be remembered for Ireland losing out on the Championship on the final day to France by points difference, it also marked Best’s first piece of silverware in a green jersey.

Best started in every game for Ireland during the 2007 Six Nations and the Craigavon native had well and truly cemented himself as Ireland’s first-choice hooker that season. The 2007 Triple Crown was a pivotal moment in Best’s test career as it would mark the first piece of major silverware the hooker would achieve in what would be a tremendous period of success for Ireland. With Declan Kidney replacing O’Sullivan as Ireland coach for the 2009 Six Nations, Best had conceded his place in the Irish pack to Jerry Flannery.

The Munster hooker started in the final game over Wales in Cardiff but was replaced by Best in the 68th minute, with the Ulsterman finishing the game on the pitch as part of the first Irish side in over 61 years to win a grand slam.

Best captained Ireland’s 2009 tour of North America starting in both games against Canada and the USA.

Ireland would win both games handily, and while the tour was largely used to blood in new players like Ian Whitten and Ian Keatley, it was Best’s first taste of leadership in international rugby after having previously captained Ulster at provincial level.

Best would have to wait another three years before he could captain Ireland again (Scotland, 2012) but the Canada game would serve as an early indicator of his leadership ability and would act as a solid foundation for his future captaincy. Best racked up the half-century mark in Ireland’s final 2011 Rugby World Cup warm up game against England at the Aviva Stadium.

The game is widely remembered for England centre Manu Tuilagi rupturing David Wallace’s ACL with a vicious hit down the sideline at the Aviva, but under less tragic circumstances the test also marked Best’s 50th cap as an Irish player. Best has had many career highlights between his 50th and 100th cap. He represented the British and Irish Lions in their triumphant tour of Australia in 2013, he was a key member of the Irish sides that won the 2014 and 2015 Six Nations championships, and he also assumed the Irish captaincy on a full-time basis against France in the opening game of last season’s Six Nations.

But Best’s defining moment as an Irish player undoubtedly came earlier this month when he captained the first Irish side in history to a win over the All Blacks in Chicago.

Best played the full 80 minutes against New Zealand in the 40-29 win at Soldier Field, and after the game he thanked everyone that had played a part in the journey to Irish Rugby’s biggest ever win.

“I couldn’t be prouder of the work we put in,” Best said after the game.

“It hasn’t just been the last week or couple of weeks. It’s been a long time coming and it’s history made.”

Like Ireland’s maiden win over New Zealand in Chicago a fortnight ago, Best’s ascension to 100 test caps has been a long time coming, and Irish fans couldn’t be prouder of the work he’s put in along the way.