The development of rugby union into what it is today was only made possible by the IRB’s decision in 1995 to declare rugby union an open game, by which it meant that restrictions on payments or benefits to those connected with the game would be removed entirely, ushering in the era of professionalism.

Whilst rugby union has developed into a sport enjoyed by millions around the globe, the countries where it has deep-rooted traditions are still regarded as the most successful at club and international levels. This can be attributed to a combination of resources available to these rugby federations (human and financial), large consumer bases which provide support and participation at grass-roots levels, and higher financial incentives for potential professional rugby players (luring them from other sports).

Kenneth Quarrie and Will Hopkins published a study in 2007 regarding the changes in match activities and player characteristics in Bledisloe Cup matches between 1972 and 2004. They found that the introduction to professionalism in 1995 affected the way in which rugby was played more than any other event in those 32 years, as highlighted in the graph below:

Similar studies have been conducted on the impact of professionalisation on rugby union in the northern hemisphere. Simon Eaves and Mike Hughes in 2003 and 2005 found that the number of rucks per match had increased between 1988 and 2002 (but were shorter in duration), and that there was a marked increase in the time that the ball was in play. Their research was conducted using data from 12 matches from the Five and Six Nations tournaments between 1988 and 2002. These finding highlight how the professionalisation of rugby union had a similar impact on coaches and match activities in both the Northern and Southern hemispheres.

Making rugby union an “open game” enabled players to earn a living representing the club and country, meaning that they now had financial incentives to train harder and smarter. These players got bigger, faster and stronger because of the increased training. Combined with the fact that there was increased research and more widely available information on how to exercise specifically for rugby, and the fact that coaches were actively searching for unique physical specimens to recruit, it is easy to see how rugby has gotten to the stage where there are players the size of Uini Antonio (197 cm, 145 kg), Will Skelton (203 cm, 140 kg) and Devin Toner (210 cm, 130 kg). This shift to taller and heavier players is shown in the graph below, which was gathered from Quarrie and Hopkin’s 2007 study:

A  study by CNN found that the average weight and height of three backline players in the New Zealand team between 2004 and 2014 went from 98 kg and 182 cm to 98 kg and 188 cm, showing how height is seen as being a increasingly important advantage. The fact that top level, male rugby players have gotten taller and heavier in almost every position since 1995 highlights one of the ways in which financial incentives forced clubs to develop and adapt their selection, recruitment and training methods to suit a game which was (and to an extent, still is) evolving at a rapid pace.

The desire for taller, heavier and more experienced players was primarily driven by the fact that activities within matches were changing. Most notably – the number of scrums, lineouts and mauls reduced; the number of rucks, tackles and passes increased; substitutes were more often used and had bigger impacts on the outcomes of matches; kicking from hand became less utilised; and more points were being scored per match due to increases in tries and conversions. These trends have largely continued since 2004, highlighted by the following table which compares the averages of match activities occurring per match in World Cups:

The lure of financial incentives meant that clubs and nations with more resources and larger player bases could afford to make changes to their domestic club structure and training methods in the attempt to achieve success in the short and long term. New Zealand have been the most successful rugby nation in the professional era, highlighted by the fact the All Blacks have been named Team of the Year for the last six years in a row and won two World Cups in a row. Somewhat surprising, seeing as there are approximately 137,000 registered  players at 600 clubs in New Zealand, whereas France has close to 320,000 registered players at 1750 clubs and England has more than two million registered players at over 1800 rugby clubs. 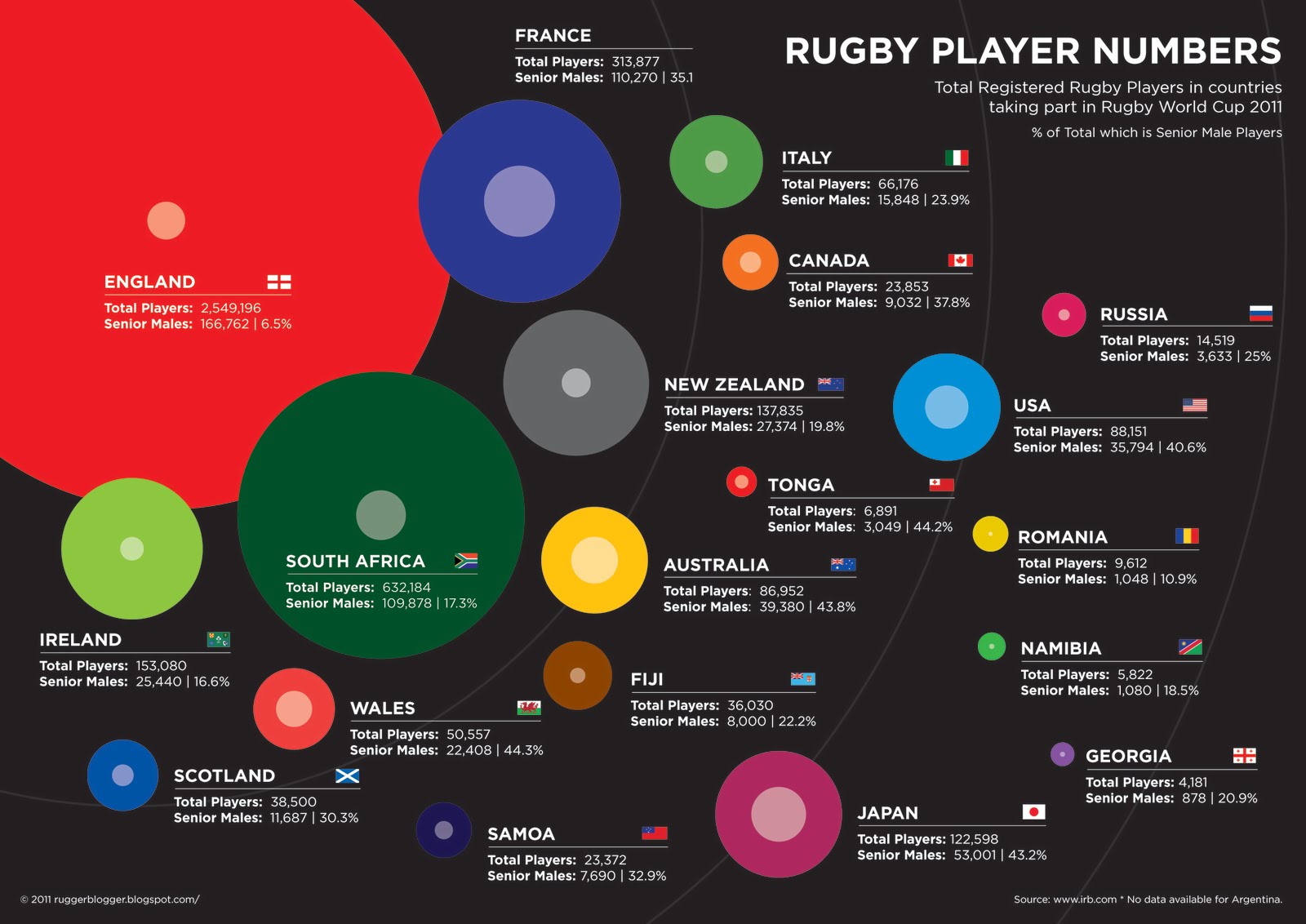