A loss and two wins. It was the minimum requirement. But judging by the manner in which these results were carried out, the Guinness Autumn Series can be viewed as a relative success for Ireland.

Going into November on the back of four straight losses and missing a host of household names, the South Africa game was not quite a must win, but at the same time a loss was not going to go down well either. A decent home record against the Springboks over the last decade was cause for optimism. Alas a strong second half showing by the visitors ensured a second consecutive victory for the ‘boks at Lansdowne Road. However, it was not seen as a disastrous result. The four point winning margin seemed about right on the face of it, and the emergence of Mike McCarthy on the international stage was a major boost.

The Fiji game can be viewed as a success. It was never going to be a tight game, but the display of the back-line, top heavy with Ulster players, ensured that the Pacific Islanders did not come away from Thomond Park with even a score. However, there was always one eye on the following week, with the Argentinians coming to town.

Ireland v Argentina games have been a hotly contested fixtures since the dawn of the professional era. And this one was set to be no different. During the week, many had dubbed it as a ‘Cup Final’ for Ireland with vital World Ranking points at stake. A web of permutations were simplified down to the fact that it was a must win game. Captain Jamie Heaslip was among those who looked to cool hype before the match; “In the greater scheme of things it’s an important game, but for us it’s like any other match.” But a blind man could see through this. No player is immune to that kind of pressure.

All that said, the players can only be admired in the manner in which they fronted up to the Pumas in The Aviva Stadium. The new-look back three of Bowe, Zebo and Gilroy looked a constant threat, as Sexton had an impressive game pulling the strings at 10. Credit must also be given to the front row who more than held their own at scrum-time. There was a vast improvement in the line-out from the South Africa game. Overall; a good day at the office, although there is a school of thought that the Argentinians were a shadow of their showing in Wales a fortnight earlier; tired at the end of their tour and a long season, perhaps looking forward to let off a bit of steam in Temple Bar that night.

Whether it was forced or not, Declan Kidney must be given credit for giving youth a chance this Autumn. In the absence of leaders O’Driscoll and O’Connell, the younger element stood up and were counted. With a view to the long term, there is genuine hope, as players who have been around for a while are being phased out, or are more replaceable than before.

Ireland, on the whole, must be happy with their three matches. They avoided a potential banana skin against Pacific Island opponents, something rivals Wales and Scotland failed to do. England still await a win against top tier opposition, while France look impressively powerful. With Les Blues at home, Ireland can look forward to The Six Nations with confidence of mounting a serious assault on the title. 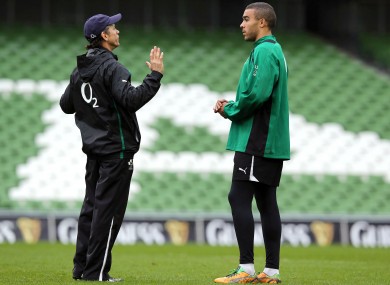 Over the three games, there has been performances which have left an impression on Declan Kidney:

Mike McCarthy – The second row was a colossus against South Africa despite the misfiring line-out. Definitely moved up the pecking order.

Donnacha Ryan – Another second row who more than acquitted himself superbly in the two test matches. Looking to steal the starting berth from Munster colleague O’Callaghan.

Simon Zebo – The Corkman has proven that he is an adaptable outside back, and not just a strong running winger. Solid displays at fullback surely drags him up in Declan Kidney’s estimations.

Craig Gilroy – The story of the month. The young Ulster player burst into the reckoning with an impressive hat-trick against Fiji, and left such an impression as to gain a spot on the starting XV against Argentina. He didn’t disappoint either. Man of the Match yesterday in many peoples’ books.

Donncha O’Callaghan – Where there are winners, there are always losers. And due to the impressive form of McCarthy and Ryan, the Munster veteran is surely slipping down the ranks, especially with comrade Paul O’Connell set to return.

Andrew Trimble – A solid showing against The Springboks was not enough for him to keep his place for the match against The Pumas. With Gilroy coming to the fore, and Kearney’s return set to push Zebo to the wing, the Ulster flyer must worry for his place.

SPORT IS EVERYTHING. Brian Barry.

Brian Barry is a University College Cork student and also writes for vavel.com. He is a key member of the SportIsEverything team and is a n extremely talented sports journalist. His sporting knowledge extends to many sports and this is reflected in his works. You can follow him on Twitter via @briangbarry or even send an email to sportiseverything@hotmail.co.uk.