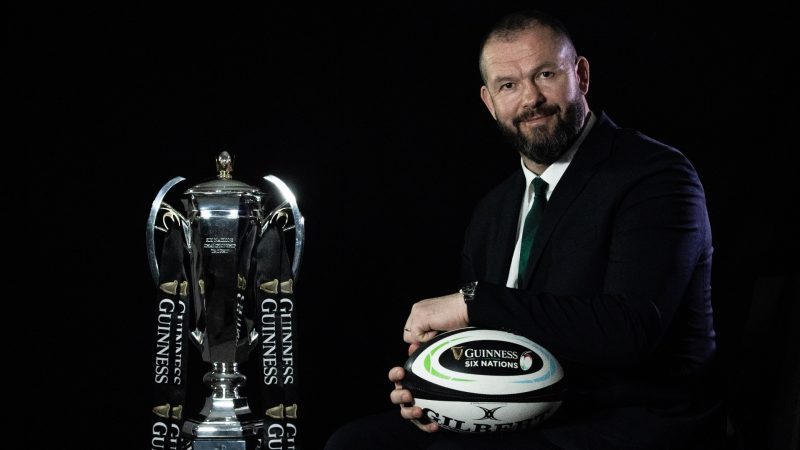 Andy Farrell has explained that the form of Jack Crowley and Ross Byrne is behind his decision to omit Joey Carbery from Ireland’s Six Nations squad.

Carbery had assumed the role of Ireland’s second-choice out-half for quite some time, although the 27-year-old has suddenly found himself behind Crowley and Byrne in the pecking order.

Although Carbery has started at out-half for an ever-improving Munster side in the province’s most crucial games this season, the national team coaches have not been convinced by his performances.

Speaking at the Six Nations media launch, Ireland head coach Andy Farrell explained that Carbery has been told about what he needs to improve on, while praising the recent form of Crowley and Byrne.

“Obviously there’s some feedback that has gone Joey’s way. Obviously he was upset enough because it means a lot to him to be picked for Ireland. But obviously he’s had the feedback, like all the rest of the guys as well,” Farrell said.

“At the same time, whilst Joey goes ahead and works hard on that and tries hard to get back in the room there’s another guy there in Ross that’s had plenty of feedback over the last couple of years.

“We think he’s progressed significantly with his game in that regard so therefore he gets an opportunity to see if that can transfer to the international stage.

“Then obviously Jack is somebody that’s had a short period of time in camp with us and we’ve seen him progress very quickly.

“We’re giving him a bit more time to see if he can reach his potential because he’s pretty important to us moving forward as a group.”

Including Conor Murray and Keith Earls.

The omission of Carbery wasn’t the only selection decision that garnered attention, as Conor Murray and Keith Earls were included despite their recent standing at Munster.

While they are two of the most experienced players in Ireland’s squad, neither have started for Munster in their two recent crucial Heineken Champions Cup clashes, while Earls didn’t even make the bench in either match.

Nonetheless, Farrell has full confidence in both men’s ability to add to Ireland’s Six Nations squad.

“I know those guys, I know what they bring to our squad,” Farrell stressed.

“And when you pick a squad and bring them together, it isn’t just about the best players in the starting 15, it’s about what others can bring to the party to make sure we’re as good a team as we possibly can be.

“Those two guys are top, top professionals and brilliant players in their own right and will add to the competition massively.”

Ireland will face Wales on the opening weekend of the Six Nations, who will be coached by Warren Gatland again after Wayne Pivac was dismissed as head coach following a dismal 2022.

Farrell worked as a defence coach under Gatland on the British and Irish Lions’s tours in 2013 and 2017 and is well aware of what the Kiwi coach brings to the table.

“He’s a serial winner, as far as the competition is concerned,” Farrell said of Gatland.

“We know first hand, working with him, of what his sides look like as far as physicality, set-piece, territory, kicking game, attacking kicking game and territory and possession in the right parts of the field.

“That’s what’s worked for him in the past, and again I think he’ll keep it pretty simple as far as the style is concerned, to try and stand for something, and all of those bits of the game spring to mind.”