Opinion – Conor McGregor’s Case As The Best Irish Athlete Ever

The best Irish athlete of all time debate can often be an uncomfortable conversation to have at the best of times.

It can often feel like when you have a grandparent that gets a bit out of control at a big family function, the conversation to reel them back in is naturally a talk that can get quite volatile, but you know that it is a conversation that is absolutely necessary.

It’s similar to McGregor in an Irish sporting context; in that it’s uncomfortable; as you almost feel like the Dubliner can be discredited in the greatest Irish athlete conversation due to his brash and brazen nature, his cockiness and his confidence.

There’s a general divide in Irish society towards Conor McGregor largely because of the way he conducts himself in public. Talking to those around SBG and those who know Conor, or those that have trained with him, they assure you that he’s actually a very approachable guy and will go out of his way to help people, particularly when it comes to mixed martial arts and assisting his teammates or training partners.

But the other side of McGregor, the more popular and glamourised side of the Crumlin native, is the showman. The entertainer. The master of mental warfare. The provocateur. The recently crowned UFC lightweight champion is a master of this side of professional MMA. Whether it’s going toe to toe with just about every fighter at the UFC’s Go Big press conference in Las Vegas last year, or whether it’s showing up late to the UFC 205 pre-fight press conference in a white mink jacket and a red sweater, McGregor knows how to draw attention to his cause.

But what is often lost in McGregor’s balatant pursuit of self-promotion is that it’s actually in his own self-interest to be as flagrant and as controversial as possible in the lead up to his fights.

The mink jackets, the three-piece suits, the well-researched and overtly confrontational insults he frequently exchanges with his opponents in the build up to his fights.

It’s an act, a highly profitable, lucrative yet divisive act. As Floyd Mayweather Jr., Forbes highest grossing athlete for 2015 once said: “Some pay to see me win, some pay to see me lose, but they all pay.”

It seems like a fairly rudimentary point to highlight for most sports fans – a fighter says wild things to increase interest in his upcoming fight – shocker – but it is a fact that can sometimes be lost on the Irish public, particularly among Irish athletes who have been raised with the ‘protect-the-team’ and ‘compliment-the-opposition-at-all-times’ mentality.

An example of which is Anthony Moyles, a former Meath defender and an occassional contributor to the Meath Chronicle. Moyles exemplifies the former Irish athlete disdain towards McGregor and possesses all the hallmarks of a begrudging former player.

Platform with a local media outlet because of your playing career – check.

Validate your opinion by comparing professional MMA to your own sporting endeavors as an amateur athlete – “Now before I go on, I will admit that I am no expert when it comes to UFC or indeed martial arts, but I would feel that I do know about playing sport at the top level and therefore what is required” – check and check.

Throw in a ‘my father once told me’ reference, a hallmark of the county GAA player, for good measure – “My Father used to say to me that if a man started to talk or say what he was going to do to me during a game then he was already beaten” – check, check and check.

Moyles is in no apparent danger of appearing on the MMA Hour anytime soon for his insights on mixed martial arts but he does hold an opinion that is shared throughout certain parts of Irish society.

An opinion that attempts to detract McGregor’s promotional exploits from his professional accomplishments.

“McGregor seems hell bent on the money-making capabilities of the UFC,” Moyles continued.

“He unashamedly tell us that it is all about the “bucks”. If that is his modus operandi well then brilliant and I hope he makes millions from it.

“And of those that he has, will they just all be about the dollar too?”

They’re not painting murals of Conor McGregor around Ireland because he wears mink jackets and a Rolex watch. Irish people don’t want to take pictures with him because he drives a BMW i8 or because he lives in a mansion every time he goes to Las Vegas. 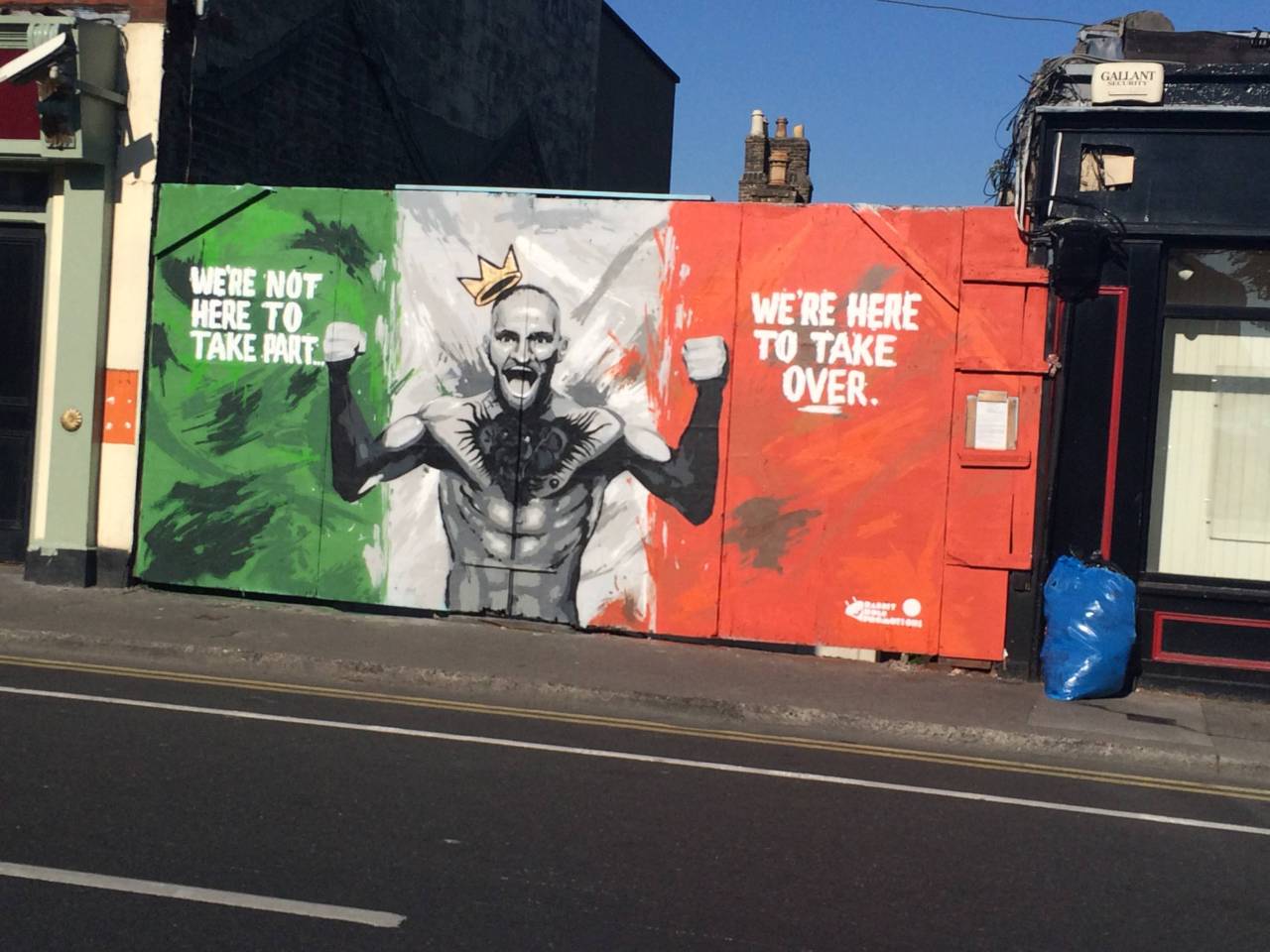 He inspires Irish people because of his consistent ability to achieve his goals and turn his dreams into a reality. A plumber’s apprentice into a two-weight world champion in one of the most cut-throat organisations in professional sports. That’s his legacy.

But where does he rank among the other great Irish athletes of all time? Is a UFC belt equivalent to an Olympic Gold medal? Is a UFC title fight akin to a World Rugby Player of the Year nomination? It’s almost impossible to tell.

If you were to say that Conor McGregor is a better Irish athlete than Brian O’Driscoll, because he won two world championships in the UFC and O’Driscoll never received the World Rugby Player of the Year dong, despite three nominations, you’re going to have an avalanche of critics pointing to Ireland’s Grandslam win in 2009, Leinster’s three Heineken Cups, and his 141 international caps.

Similarly, if you’re an avid Hurling fan, are you going to be convinced that McGregor’s UFC accomplishments outweigh Henry Shefflin’s 10 All-Ireland titles, 11 All-Star awards and three Hurler of the Year awards? Probably not.

But at least McGregor now firmly has his seat at the big family function of Irish sports stars. The petition to have his face on the back of the Euro coin earlier this year was undoubtedly premature, but his place in the pantheon of Irish sporting greats is more than deserved at this stage. Even if it’s still a difficult conversation to have.