A flyweight bout between Paddy ‘The Hooligan’ Holohan and Willie Gates has been announced for the UFC’s card in Rotterdam on May 8th, which will be the promotions inaugural event in the Netherlands. 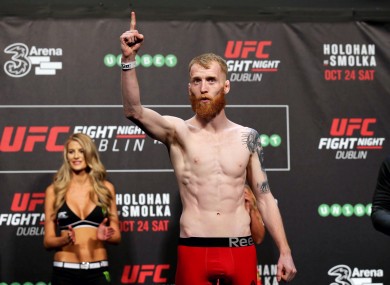 ‘The Hooligan’, whose current mma record stands at 12-2-1, will be eager to get back into the octagon after coming off a second round loss by rear-naked-choke to Louis Smolka in front of his home crowd in Dublin in October.

Thus ending Holohan’s two fight win-streak in what was a bitterly disappointing night for the home crowd at UFC Fight Night 76.

29 year old American Willie Gates (12-6), who is looking to rebound from a first round loss to Dustin Ortiz in August by way of TKO, will also have a point to prove as he attempts to fight his way up the flyweight division rankings in what has been a poor start to his UFC career with a record of 1-2.

The two fighters have been exchanging heated words amongst eachother on Twitter as of late, making this an obvious fight for the UFC to bill.

After being announced by Ariel Helwani late last night, Gates took to Instagram to confirm the bout.

This should be an intriguing night for Irish fans as Paddy joins fellow Irishman Neil ‘2 Tap’ Seery (16-11-0) on the card who is set to face Japan’s Kyoji Horiguchi (16-2-0) in another flyweight encounter.

It will also be a busy night for Straight Blast Gym coach John Kavanagh as Holohan’s teammate, and honorary Irishman, Gunnar Nelson (14-2-1) is poised to take on Russian Albert Tumenov (17-2-0) in a welterweight encounter.

The UFC’s first card in Netherlands will be headlined by Alaistair Overeem (40-14-0) vs Andrei Arlovski (29-11-0) in the Ahoy Rotterdam stadium.