For the final few weeks of the League of Ireland season, there will be a new feature brought to you by Kenny’s Kids and Pundit Arena.

Anyone who follows Kenny’s Kids will know that the Twitter account focuses on Ireland internationals, Ireland underage internationals and any other promising Irishmen under the age of 24.

As the League of Ireland becomes more and more important to the future of Irish football due to Brexit implications, we feel like it is time to look closer to home.

Shamrock Rovers secured the league title at Tallaght Stadium as Danny Mandroiu (who trained with Ireland during the Summer) bagged a brace in a 3-0 win over Finn Harps. Ireland U19 striker Aidomo Emakhu (18) also scored courtesy of an assist from Ireland international Graham Burke.

Emakhu has enjoyed a very promising debut season for the Hoops and it was fitting for the youngster to score in their title-deciding victory. Former Ireland international Joey O’Brien also started for the champions.

FAI Cup finalists St Pat’s were comfortable winners away at Longford as Scotsman Matty Smith scored three and assisted another. Ireland U19 defender James Abankwah (CB, 17) and 19-year-old sensation Darragh Burns both started for the Saints while Ireland U21 forward Dean Williams started and scored for the hosts. Another Ireland U21 squad member, Darragh Nugent (CM, 19) also started for Longford but couldn’t prevent a heavy defeat against Stephen O’Donnell’s high-flying Pat’s.

Darragh Burns has been getting lots of attention for his performances over the last month or so and although he didn’t score last night, the winger did manage to assist the visitors’ fourth and final goal of the night. You can listen to St Patrick’s Athletic Director of Football Ger O’Brien speak about Darragh’s switch from the north to the Republic on the LOI Arena podcast here.

Another great night for The Saints! ?

Ireland U21 squad member Ronan Boyce (RB, 21) was the hero for Derry City last night as he popped up in the 93rd minute to salvage a point for Ruairaidh Higgins’s Candystripes. Ireland U21 internationals Andy Lyons (RB, 21), Tyreke Wilson (LB, 21), Dawson Devoy (CM, 19) and Ross Tierney (CM, 20) all started for Bohs on the night but could not hold out for what would have been an important three points. Ireland squad member James Talbot (GK, 24) also started for the Gypsies.

Ronan Boyce has scored a dramatic late equaliser to earn @derrycityfc a draw!

The Candystripes have scored deep in injury time at the Ryan McBride Brandywell to level matters. It could be a crucial goal in the hunt for Europe!

Dundalk edged out an important win in the relegation scrap as Daniel Kelly found the back of the net for the Lilywhites on the stroke of half-time. One cap Ireland international Andy Boyle (CB, 30) started for the hosts at Oriel and Ireland U21 squad member Niall O’Keefe (CB, 21) came on for Waterford in the 62nd minute.

A huge goal has been scored at Oriel Park right on the stroke of half time!

Daniel Kelly got on the end of a brilliant ball before calmly slotting past Paul Martin in the Waterford goal.@DundalkFC 1-0 @WaterfordFCie

Ireland Under-19 striker Johnny Kenny and 21-year-old centre-back John Mahon were the goalscorers for Sligo Rovers last night against Tim Clancy’s Drogheda. Ireland U21 squad members David Odumosu (GK, 20) and Killian Phillips (CM, 19) both started on the Drogs side but they couldn’t overcome a Rovers team buoyed by the return of experienced midfielder Greg Bolger

18-year-old Kenny has now played thirty games this season with a tally of ten goals and three assists. The youngster has been linked to Celtic in recent months.

Johnny Kenny has surely secured the three points for @sligorovers!

It wasn't the prettiest of goals, but after a scramble in the box, Kenny expertly steered the ball into the corner. Big goal!@sligorovers 2-0 @DroghedaUnited

Cork City put on a superb display at home against John Caulfield’s Galway United. Jonas Hakkinen, Alex Byrne and Cian Coleman all got on the scoresheet for City as Galway, who had Ireland U21 squad member Alex Murphy (RB, 17) amongst their options, suffered their first defeat in seven matches.

Ireland underage midfielder Barry Coffey (19) and Aaron Bolger (21) both started for Cork and more young talent joned them in the second half. Cian Bargary (CM, 20), Darragh Crowley (FWD, 21) and Beineon Whitmarsh (FWD, 21) all came on, but the headline news was the introduction of Ireland U17 captain Cathal Heffernan (CB, 16).

Heffernan was on trial in Italy with Inter Milan, Juventus, Atalanta and Roma earlier this year and with Olympic genes, the athletic teenager has a great chance of making a name for himself in the game. Last night he became Cork City’s youngsest ever debutant and we will be hearing a whole lot more of his name in the years to come. 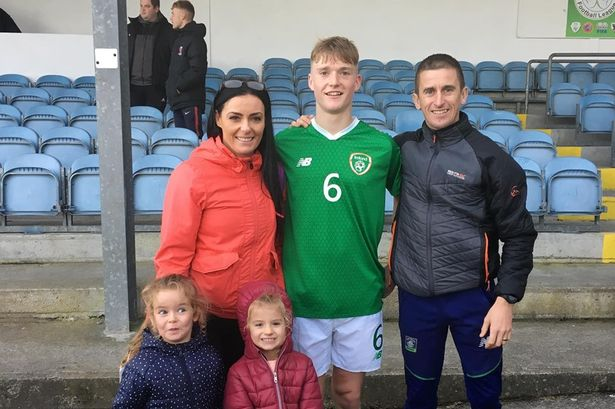 Ireland under-19 midfielder Evan Caffrey scored for UCD away to Shelbourne last night at Tolka Park. Shelbourne were in party mode as they lifted the league title on Ian Morris’s final game as manager, but the Students still did well to earn a point with an experimental line-up, Ireland U21 attackers Colm Whelan (ST, 21) and Liam Kerrigan (WNG, 21) were both rested for their play-off clash with Treaty United next Wednesday evening.

Shelbourne did not start the game with any Ireland underage players on the pitch but under-21 left-back Kameron Ledwidge (20) was introduced in the 79th minute.

Wexford finish the season rock bottom of the First Division but it looks like much brighter days are ahead. Daniel Dobbin (20), Tom Considine (19), Evan Farrell (18) and star man Jack Moylan (20) all got on the scoresheet against the Seagulls on Friday night. Ireland U21 players Brian Maher (GK, 20) and Brandon Kavanagh (21) both started for Bray, as did 20-year-old winger Callum Thompson and 21-year-old Richie O’Farrell, who also have Ireland underage pedigree. Attacking midfielder Kavanagh scored both goals to complete a fine campaign for the Bray men.

Jack Moylan, Wexford FC Players Player of the Year, wrapping up the win and the season with another classy goal. pic.twitter.com/bagTlJzAFS

There were no Ireland underage players involved in the clash between Cabinteely and Treaty United last night but Tommy Barrett’s men will look forward to the future with excitement as 21-year-old winger Willie Armshaw and teenage debutant Josh Quinlavin both got on the scoresheet.

How good was last night?
What a moment for Josh Quinlivan ? pic.twitter.com/Y6TqOcR1TO

Cobh Ramblers picked up a rare win on the road to finish their season in 8th place in the First Division. There were no Ireland underage talents involved in the fixture but former Liverpool U23 striker Glen McAuley (21) did start for Paul Doolin’s Athlone team.

? Danny O’Connell’s late winner last night to finish our season with a win

His fifth goal of the season since joining in July ?#LOITV ? pic.twitter.com/wpnfpZa0Fc

Make sure to follow Kenny’s Kids for extensive coverage of Ireland’s best up and coming talents.