Tiger Woods Finds Open Return A Pain In The Neck

Tiger Woods’ much-anticipated return to the British Open after a two-year hiatus sparkled early on before ending in a level-par 71 at Carnoustie on Thursday.

The 42-year-old three-time Open champion — who due to back issues had missed the last two editions — admitted afterwards he was suffering from a sore neck but insisted it had not affected his round too much.

Woods has shown glimpses of his old form at times since returning to the tour last December, and he looked in good order as he went out with two birdies, before an erratic inward nine featured three bogeys and just one more birdie.

“It’s been bugging me for a while,” said Woods of his neck complaint.

“Everyone acts like this is the first time I’ve been bandaged up. I’ve been doing this for years…braces and bandages, just that this time it’s actually visible.”

Woods said he felt good on the practice range prior to his round in the afternoon and remarked that he couldn’t really blame the neck problem for his play, except with his swing from time to time. 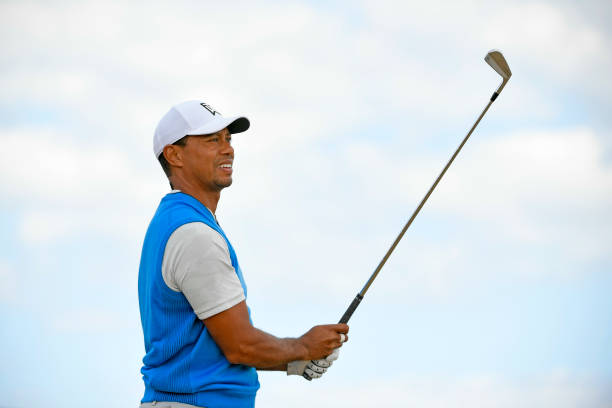 “You know, a little bit here and there, but it’s all right,” he said after finishing the day five shots behind leader Kevin Kisner.

Woods, who denied reports he had snubbed waiting autograph hunters at practice on Wednesday, said he played better than his score suggested.

“I played better than what the score indicates because I had two 8-irons into both par fives today, and I end up with par on both of those,” he said.

“If I just clean up those two holes and play them the way I’m supposed to play them with 8-iron in my hand, I think I’d probably have the best round in the afternoon wave.

“So it certainly could have been a little bit better.” 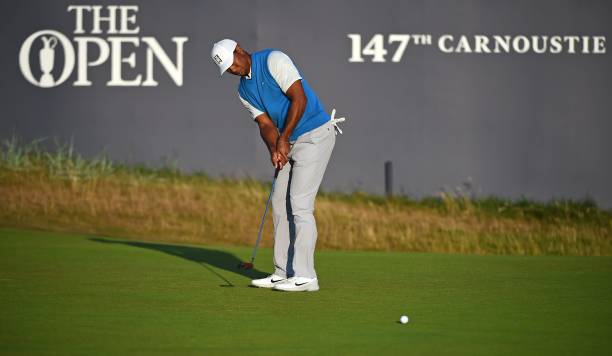 However, Woods was far from downbeat about his chances with the sunny weather due to take a turn for the worse and with his innate ability to play links golf better than many of his rivals.

“I’ve just always enjoyed — this is how the game should be played,” he said.

“When we play at home in the States, that’s not the case. Everything is going straight up in the air, but this is very different.

“It’s amazing the shot, the creativity. I mean, you can roll the ball 100 yards if you wanted to, or you can throw it straight up in the air.”