The hotly-tipped United States team of world number one Jennifer Kupcho (Wake Forrest), Lilia Vu (UCLA), and Kristen Gillman (University of Alabama) have one target in mind this week at the Espirito Santo Trophy:

That was the message from the top amateur in the world, Jennifer Kupcho ahead of the opening round of the World Amateur Team Championships at Carton House.

Kupcho, 21, of Westminster, Colorado, is enjoying a strong period on the fairways and travels to Kildare full of confidence. She led every round in claiming the 2017 Canadian Women’s Amateur, while in May, she won the NCAA individual title as a junior at Wake Forest University, and has set her sights on another strong showing in Kildare. 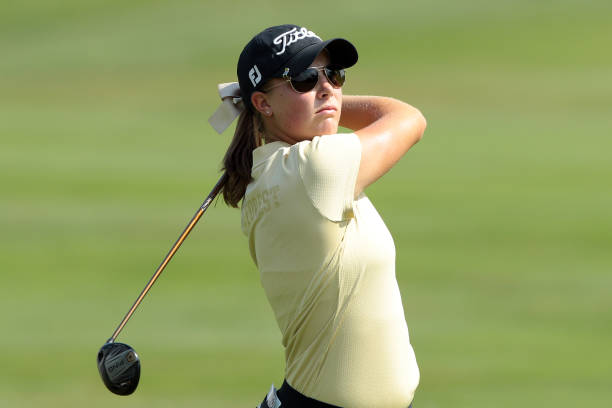 “I really like both (Carton House) golf courses. I think they both are in great shape.”

The US have been drawn with Ireland and the Republic of Korea, with Kupcho playing with Annabel Wilson (IE) and Ayean Cho.

“The (Ireland players are) really nice. We’re pretty excited to play with them just because they’re nice people. We get along with them pretty well and obviously, they’re good players too.” said the Mark H. McCormack Medal recipient.

“I think if we go out there and hit every shot with confidence and just play our game I think we’ll have a good shot at bringing the trophy home.”

Round 1 of the 28th Espirito Santo Trophy tees off at 7:45 am on Wednesday, with Olivia Mehaffey the first of the Irish to hit the course.

Groupings can be seen below.

Tickets are free and you can get yours here.