It seems that Manchester City have stolen a serious march on Chelsea for the Premier League title.

A day after agreeing the £32m purchase of Valencia’s Nicolas Otamendi, Manuel Pellegrini’s men have agreed a contract with the Bundesliga’s player of the year, Kevin de Bruyne.

The ever reliable Jamie Jackson of The Guardian reported that the Wolfsburg star has accepted the offer of a five-year deal for £200,000 a week. 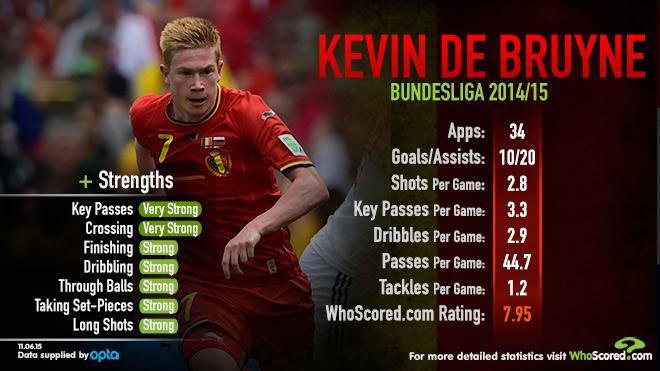 De Bruyne is obviously an incredible talent, and was unfortunate not to break into the Chelsea team. After fantastic spells with Werder Bremen and Wolfsburg, he looks to have gotten his second chance to prove himself in England.

All that is left now is for Klaus Allofs (sporting director of Wolfsburg) to accept the rumoured £50m offer from Man City for de Bruyne.

Pellegrini has already added Raheem Sterling, Otamendi, Fabian Delph, Patrick Roberts and Enus Unal to the club, and should the Belgian join, the Citizen’s summer spending would be taken up to £152m.

It could well be the Chelsea ‘reject’ de Bruyne who decides where the Premier League title goes this season.

Quick and intelligent on the ball, a hard worker and a player with genius movement, the addition of de Bruyne really is the signing of the summer.