As the 2017/18 season edges closer and closer to its conclusion, the Fantasy Football Fairy is back with his top picks for Gameweek 33.

The stand-out fixture in this weekend’s round of Premier League action sees Manchester City afforded the opportunity to clinch the Premier League title against bitter rivals Manchester United in the late kick-off on Saturday evening. Everton also welcome Liverpool to Goodison Park for the Merseyside Derby in Saturday’s early kick-off.

After Liverpool’s outstanding Champions League victory over Manchester City, I expect both Pep Guardiola and Jurgen Klopp to rotate their teams and therefore have resisted to include their FPL assets in my selections. Spurs, Arsenal, Chelsea and Leicester all face favourable opposition and feature heavily in my Gameweek 33 selections.

Outlined below are my top picks to help you gain some points on your mini-league rivals and jump up the overall rankings.

FPL managers will be following Spurs’ trip to face Stoke this weekend with intent following their demolition of Chelsea last weekend. Spurs have racked up fourteen clean sheets this season, conceding only twenty-six times and therefore £5.4m priced Hugo Lloris gets the nod as my premium goalkeeping pick for Gameweek 33.

Over the last six gameweeks, Stoke rank second lowest in the league for goals scored with a mere three goals over those fixtures. Leicester goalkeeper Kasper Schmeichel has secured eight clean sheets this season, with five of these coming at the King Power Stadium. The Foxes welcome Newcastle this weekend who have won their last two league fixtures, scoring four goals and conceding none.

With fifteen minutes remaining last weekend, the £5.0m priced goalkeeper produced a crucial penalty save from a Glenn Murray spot-kick as he returned a monster fifteen FPL points haul for owners.

Brighton’s Mat Ryan will fancy his chances of keeping a ninth clean sheet of the season as Huddersfield arrive at the Kirklees Stadium to take on Chris Hughton’s side this weekend. Huddersfield have now failed to score in seventeen of their thirty-two league games this season, which is an astonishing statistic.

Chelsea defender Marcos Alonso made his Spanish debut against Argentina over the international break, to remarkably follow in the footsteps of both his father and grandfather. The £7.2m priced FPL asset now has two months to earn himself a place in the Spanish squad ahead of World Cup 2018.

Speaking after his debut Alonso stated:

“It’s a massive motivation. With the World Cup just around the corner, it’s very important to finish the season well, then we’ll see the decision the manager takes.”

This kind of motivation suggests FPL points are on the horizon as Chelsea host West Ham in Sunday’s late kick-off, especially as Alonso managed three shots in last weekend’s defeat to Spurs. At the time of writing, Arsene Wenger’s weekend teamsheet looks difficult to predict as Arsenal face CSKA Moscow on Thursday night in the Europa League. However, two clean sheets in two fixtures and a weekend clash with relegation-threatened Southampton is difficult to ignore.

£5.4m priced Shkodran Mustafi has returned twenty FPL points over those two fixtures and the German defender was extremely unlucky not to be credited with the assist for Aubameyang’s second goal against Stoke on Sunday.

Watford suffered from an injury-time Jermain Defoe strike last weekend to draw a fixture in the battle for tenth and eleventh position in the Premier League. Under new manager Javi Gracia, Watford have drawn one and won three of their four home fixtures which suggests some newfound resilience at Vicarage Road.

Since losing to Manchester City in gameweek 27, Leicester have secured two wins and two draws, scoring eight goals in the process. £8.9m priced Riyad Mahrez has scored ten league goals and assisted his teammates on eleven occasions in 2,318 minutes of Premier League action.

Before last weekend’s rare blank, the midfielder scored ten plus points in successive fixtures, demonstrating his current form to FPL managers. Leicester’s welcome Newcastle this weekend as they chase down Burnley in the race for seventh position.

The £7.1m priced Brazilian has been in scintillating form of late for Antonio Conte’s side, despite Chelsea’s poor performances. The midfielder has fired off thirteen shots over the past four gameweeks, the most of any Chelsea player over this period. This weekend’s opponents West Ham have conceded eleven goals in their last three away fixtures and a confidence boosting win should be on the cards for Chelsea. 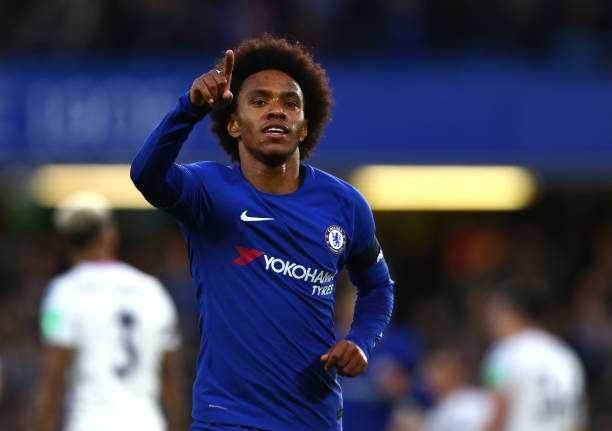 The budget midfield and forward spot was a toss-up between Pascal Gross and Glenn Murray as Brighton face Huddersfield on Saturday afternoon. Brighton suffered a late defeat to Leicester in gameweek 32, but they have the perfect platform to bounce back this weekend. £6.0m priced Pascal Gross has scored 5.9 FPL points per game on average at home this season. Huddersfield have conceded in their last thirteen away fixtures which suggests Brighton attacking returns should be on the menu.

The English striker is far and away the most transferred in player ahead of the gameweek 33 deadline as he returns from injury in time to face Stoke on Saturday afternoon. The £12.7m priced forward only managed sixteen minutes of action against Chelsea last weekend as he steps up his fitness for the Premier League run-in.

Kane has spoken out about his desire to secure the golden boot and with five goals to make up on runaway leader Mohamed Salah, this weekend’s fixture looks likely to be a solid starting point. After netting twice last weekend at home to Stoke, Arsenal’s January signing now has scored five goals and one assists in six games since arriving from Borussia Dortmund. Surprisingly, the Gabon international handed Alexandre Lacazette Arsenal’s second penalty in an attempt to build the Frenchman’s confidence for Thursday’s crucial Europa League clash with CSKA Moscow. £10.8m priced Aubameyang will be licking his lips at the thoughts of facing a Southampton defence this weekend who have only once managed a clean sheet on the road in thirteen attempts.

At £7.0m, last season’s budget FPL hero Josh King is finally stringing a run of starts together for Eddie Howe’s side who are sitting pretty in tenth position in the Premier League table at present. King has now scored two goals and assisted another in his last three Premier league starts.

Callum Wilson continues to struggle in front of goal and therefore Bournemouth will be relying on their sixteen goal hero from last season for their remaining fixtures. Bournemouth welcome Crystal Palace to the Dean Court on Saturday afternoon.