Here’s everything you need to know ahead of the 2022 Fifa World Cup qualifier between the Republic of Ireland and Luxembourg on Saturday.

The Republic of Ireland play the second game of their World Cup qualification campaign on Saturday evening against Luxembourg in Dublin. Stephen Kenny will be hoping to register his first win as Ireland boss in his 10th match in charge. Here is everything you need to know about the match, including team news and TV channel details.

Who are Ireland playing against?

Ireland are taking on Luxembourg who are ranked 98th in the Fifa world rankings.

They come into the fixture at the Aviva Stadium in Dublin following a 1-0 defeat to Qatar in a non-competitive match on Wednesday.

Ireland and Luxembourg have played each other five times, and the Boys in Green have won all five games, the last of which was a 2-1 win back in September 1987.

Frank Stapleton and Paul McGrath got the goals for Ireland on that day.

Ireland need to win and hopefully score a few goals against the lowest-ranked team in Group A. It could be Kenny’s first win as manager and potentially provide a morale boost to the Irish players.

Portugal are the top seeds in the group. The European champions are expected to top the standings by the time the group comes to a conclusion in November. They began their qualification campaign with a 1-0 victory over Azerbaijan.

Serbia, meanwhile, could be on course for at least second place following their 3-2 victory over Ireland on matchday one.

Kenny’s side must beat Luxembourg and Azerbaijan home and away to ensure that, if the top two seeds in the group slip up, Ireland will be able to capitalise.

What is Ireland’s form going into the game against Luxembourg?

Ireland are on a terrible run of form. The national team haven’t won a game since November 2019 – when they beat New Zealand 3-1 in a friendly in Dublin.

Since Kenny took charge of the team, Ireland have played nine games and have lost five and drawn the other four.

Before Wednesday’s 3-2 defeat in Belgrade, they hadn’t found the net in over 11 hours of football.

Yet, there are some positive signs. Firstly, Ireland scored twice against Serbia – the first of which was a well-worked goal finished off by Alan Browne.

Before they ran out of energy and Dusan Tadic grew into the game, Ireland were impressive against Serbia. They played with purpose and had a clear plan, something rarely seen from Ireland teams in recent years.

How can I watch the Ireland-Luxembourg match on TV?

The Ireland v Luxembourg match will be shown live on terrestrial television in Ireland.

RTÈ 2 will broadcast the game and coverage begins at 7 pm, with kick-off at 7:45 pm. The match will also be available to stream on RTÉ Player.

If you’re living outside of Ireland, or in Ireland but would prefer to watch it on Sky Sports, you can watch the game on Sky Sports Main Event. Their coverage also begins at 7:30 pm.

Who is in the Ireland squad?

Kenny named a 29-man squad for Ireland’s games this month. The former Dundalk boss is without key players such as John Egan and Darren Randolph, who are injured, while David McGoldrick has decided to retire from international duty.

Since this squad was announced, Caoimhin Kelleher, Conor Hourihane, Kevin Long and Callum O’Dowda were all ruled out through injury.

What is Ireland’s starting XI for the World Cup qualifier against Luxembourg?

Stephen Kenny named his team an hour before kick-off in Dublin. 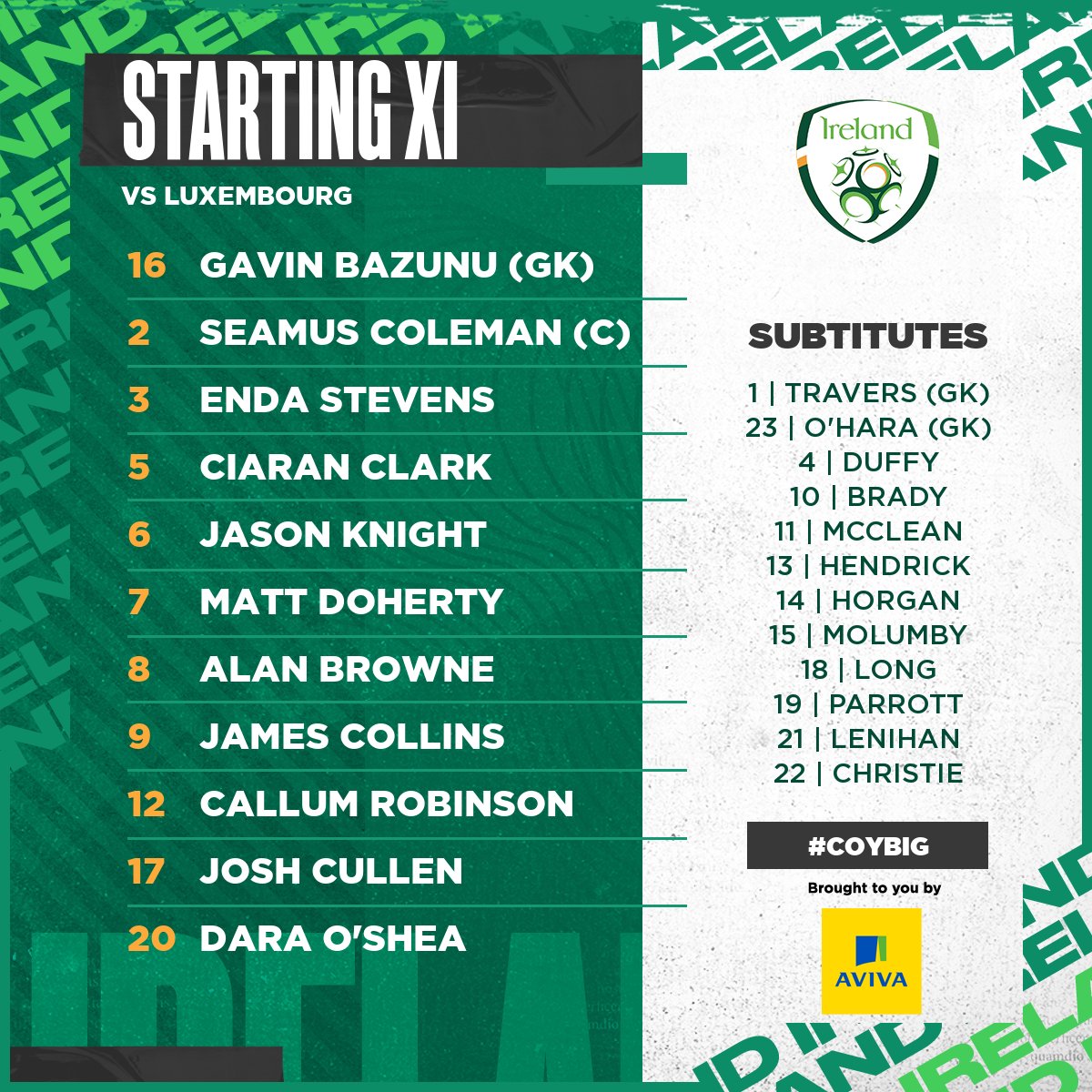