In the fourth of our eight-part ‘Aftershocks’ series, this edition brings us back to France ’98, where England’s golden boy, David Beckham, found himself in the headlines for all the wrong reasons.
_____

Having fallen just short in their host appearance at the 1996 Euros, England entered France ’98 with hopes of going one better and winning the World Cup for the first time since 1966. With experienced leaders like Alan Shearer and Tony Adams in their ranks, coupled with exciting youth prospects such as David Beckham and Michael Owen, few chose to rule England out as a possible contender should they play their cards right.

Beckham had been accused of falling victim to stardom by England manager Glenn Hoddle, given his blossoming relationship with Victoria Adams, who was a member of one of the world’s most popular bands, The Spice Girls.

Beckham may have been younger than the majority of his team-mates but was a celebrity figure in England due to his talent, good looks and charismatic character. 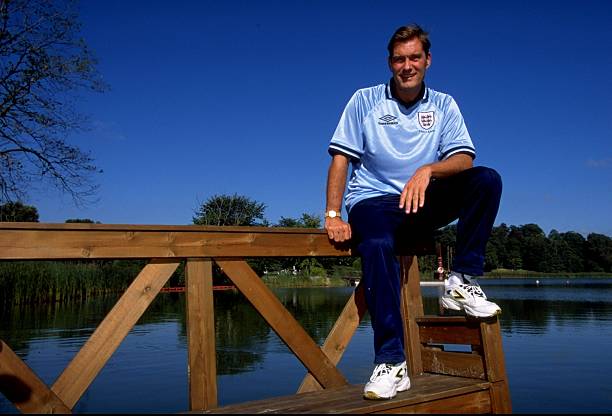 However, Hoddle grew tired of seeing his player on the front page of the paper rather than the back and left him out of the first two games of the tournament – accusing him of not concentrating on his football.

England defeated Tunisia 2-0 in their opening game, with Alan Shearer and Paul Scholes on the scoresheet, but a 2-1 defeat to Romania left them needing to beat Colombia to qualify for the knockouts – resulting in the re-appearance of Beckham.
_____

Beckham was named in the starting eleven alongside Paul Ince in central midfield as England took on Colombia in the final game of Group G. An early goal from full-back Darren Anderton settled the nerves, and with Ince having been fouled thirty yards out from goal – Beckham stepped up to make it 2-0 on the half-hour mark, whipping the ball over the wall and into the far corner past a hapless Faryd Mondragon.

He had gone from zero to hero in the eyes of his manager, as the Three Lions qualified as group runners-up, they would face Argentina in Saint-Etienne on June 30th. 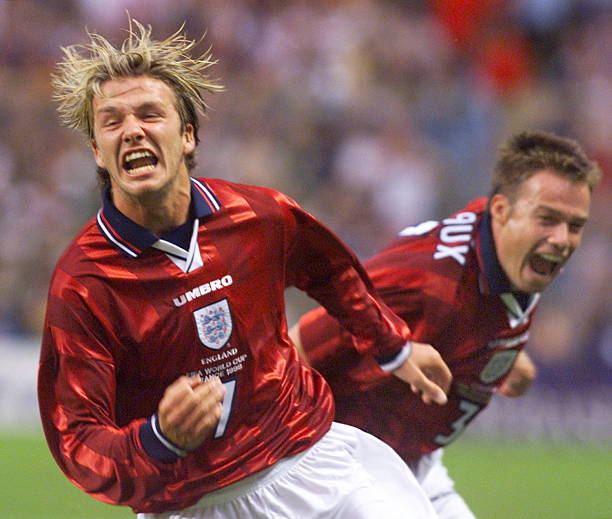 Taking on Argentina was never going to be an easy task, and England found that out very quickly – with just six minutes on the clock Gabriel Batistuta’s penalty snuck under David Seaman to hand the South Americans an early lead.

The Three Lions however were more than capable of rising to the challenge, with Alan Shearer drawing them back level just minutes later, scoring from the spot after Michael Owen was brought down in the area. 1-1 with ten minutes on the clock, the crowds in France were treated to an exhibition of attacking talent.

However, on sixteen minutes – the best was yet to come. Beckham and Owen combined for arguably England’s greatest ever World Cup goal. 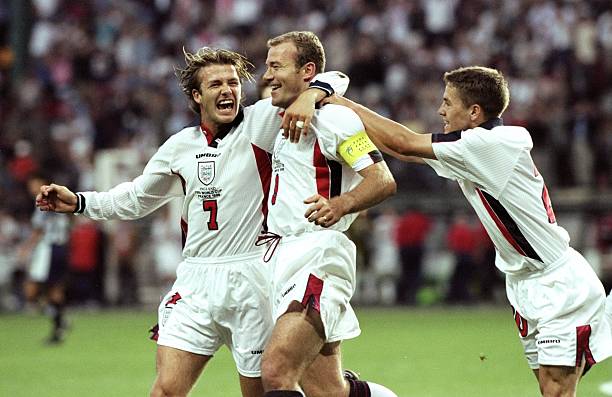 Ince broke up the Argentina attack and laid the ball onto Beckham who chipped the ball inside to Owen to set England on the counter-attack. The Liverpool star’s flick set him away before he showed tremendous pace and close control to power past the Argentina defenders as if they weren’t there and blast the ball into the top left corner to give England the lead.

England’s golden generation were shining on the world’s biggest stage, two of their most promising stars paving the way for potential glory. What could possibly go wrong?

Just before the half-time whistle, Argentina were awarded a free-kick, with Batistuta seemingly lining up for a strike at goal. England were caught sleeping, as the ball was passed inside to Javier Zanetti, who fired past Seaman into the top corner, 2-2 at the interval.

Two minutes into the second half, Beckham went down under a heavy challenge from Diego Simeone. However, the Manchester United star’s reaction to the tackle would prove one to regret. Beckham, while lying on the ground, kicked Simeone into the back of the knee, the Argentinian making the most of his appeal to have England’s star man sent off – and finding his appeal successful. 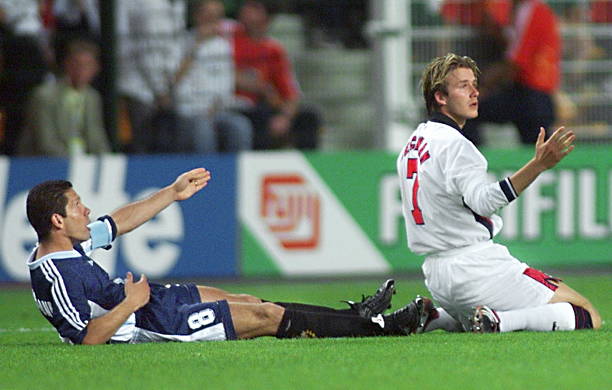 Beckham was sent off, and England would have to try and go through with ten men.

Sadly, for England – and particularly Beckham’s case, England would go on to draw 2-2 after extra-time and lose on penalties, David Batty missing the crucial spot-kick.

While it was obvious that the public would be disgruntled with Beckham given England’s elimination from the tournament, few could have imagined the backlash received.

Beckham’s effigy was hung outside a London pub, his face was printed on a dartboard in the Daily Mirror, and he received multiple death threats in the aftermath of the tournament, to the point where newspapers had to publicly appeal to their readers to stop abusing the Manchester United star. 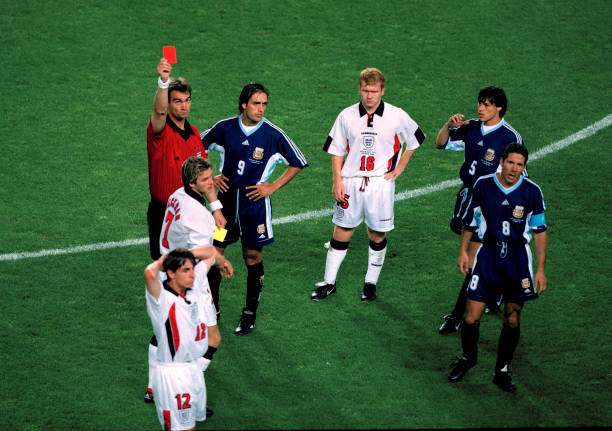 Thankfully for Beckham, he would be granted the perfect opportunity to redeem himself, scoring a wonderful free-kick in stoppage time versus Greece to send England to the 2002 World Cup.

While Beckham may have gone on to be one of the most decorated footballers in English history, having played for some of the world’s top clubs and becoming a global icon – the real aftershock which emerged from 1998 is this; a tradition in which the British press hammer into their star players on the eve of a major tournament.

Beckham’s failings in Evian blazed a trail for multiple stars to be publicly lambasted by the British media in the run-up and during major tournaments, Wayne Rooney and even presently, Raheem Sterling falling victim to scrutiny from their own so-called fans.

Beckham may have redeemed himself, being seen as a national hero in the eyes of many nowadays – but when England dissect where it all goes wrong at major tournaments, they must ask themselves the question, is it the pressure that they impose upon their own players that truly does the damage?