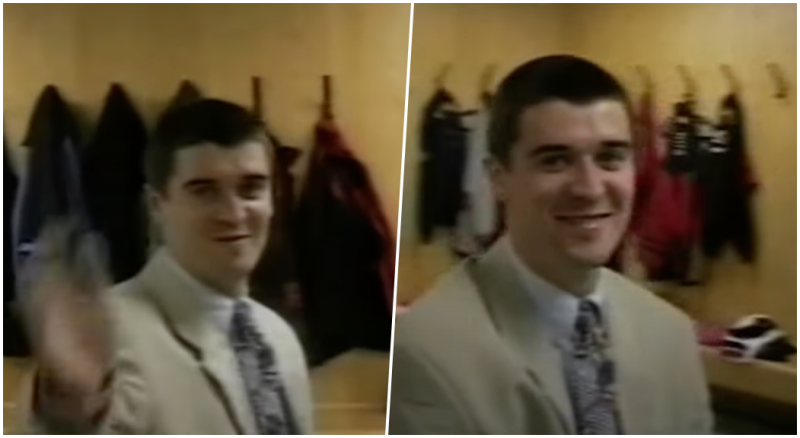 Roy Keane is a far cry from his gruff modern persona in an old clip that was recorded in the Manchester United dressing room.

In the video that is being filmed by the Corkman’s ex-United teammate Lee Sharpe, a young Keane can be seen studiously watching football on TV, as the squad prepares for a game.

His attention then turns to the camera, giving a thumbs up and an exaggerated wave, as Sharpe introduces the fresh-faced youngster.

Sharpe’s light-hearted ribbing is met repeatedly by a fairly-unorthodox laugh from Keane, which itself has become the subject of much piss-taking since the clip re-emerged on Twitter over the weekend.

A 30-second segment was shared by well-known Twitter user and United fan Nooruddean Choudry, who captioned it with the words “you should hear him laugh.”

Many users have suggested that the noise is the reason that we don’t hear Keane laugh much during his TV appearances these days, although he never has a problem in raising a chuckle among his fellow pundits with his dry wit.

A longer version of Sharpe’s footage was uploaded to YouTube last year by an account called Man Utd Retro | Rever7z, and is said to have been recorded in March 1995.

In it, viewers can see contributions from other Red Devils stars of the time, including Andrei Kanchelskis, Gary Pallister and Mark Hughes.

As a pundit, Keane has never hidden his apathy towards players who mess around before a game, although his relaxed demeanour in the video probably had something to do with the fact that United were the dominant team of that particular era of English football.

That said, United did go on to finish second in the league to Blackburn Rovers over the next few weeks, while also losing the FA Cup Final to Everton, so perhaps Keane could have done without Sharpe drawing him away from his pre-match focus.