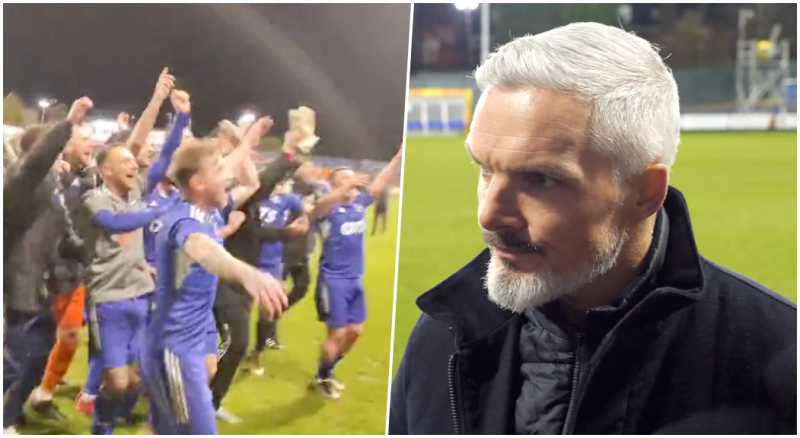 Waterford native Jim Goodwin apologised to Aberdeen fans after the club lost 1-0 to sixth-tier Darvel FC in the fourth round of the Scottish Cup on Monday night.

The Dons manager was already under pressure after a poor run of league results, and the shock defeat has led to louder calls for his sacking.

A deflected Jordan Kirkpatrick effort in the 19th minute was enough for Darvel to pull off the famous result, with the West of Scotland Premier Division side managing to hold on for the remaining 70-plus minutes against the beleaguered Scottish Premiership outfit.

Aberdeen have won only one of seven top flight games since the return of domestic football after the World Cup, with their most recent outing being a 5-0 defeat away to Hearts last Wednesday night.

If you've calmed down… WHY ON EARTH HAVE YOU DONE THAT?! 🔥

“The last two results have been extremely disappointing,” said Goodwin after Monday night’s defeat. “To concede five against Hearts and then to come here and get turned over by a junior team is embarrassing and humiliating for everyone connected to the club and we can only apologise.

“I speak on behalf of everyone, the staff and the players and we are extremely embarrassed by what happened tonight, although I think that is a bit disrespectful of Darvel.

“As a manager, especially a manager of a club the size of Aberdeen, you need to win games of football and our form since the return from the World Cup break hasn’t been good enough and tonight is an extremely difficult result for me to take.

“A really poor performance that lacked any urgency and any creativity at the top end of the pitch.”

With Aberdeen currently fifth in the 12-team Scottish Premiership, they are in danger of competing in the relegation section of the league for the second consecutive season, when it splits after 33 games.

Goodwin was appointed at Pittodrie on February 18th last year, after the former Ireland U21 international built his managerial reputation at Alloa Athletic and St Mirren.