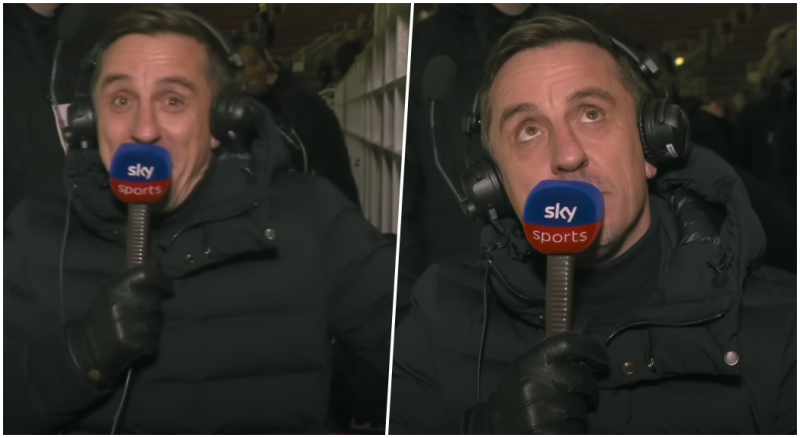 Gary Neville was forced to bat away interruptions from Arsenal fans, as he recorded the latest episode of his podcast at the Emirates Stadium on Sunday evening.

The former Manchester United defender was speaking with Sky Sports colleague Martin Tyler for The Gary Neville Podcast, with both men having to acknowledge taunts from home supporters during the recording.

Arsenal fans were in a positive mood after beating United 3-2 in a thrilling Premier League encounter, a result that restored their five-point lead over Manchester City at the top of the table.

The first incident occurred about five minutes in, when Neville appeared to react to some shouting from home fans by saying: “I don’t know whether it’s going to turn a little bit nasty, this, from a little bit of good humour.”

After around 12 minutes, a man’s voice can be heard asking “are you going to finish above us Gary Neville?,” which led the pundit to say “a lot of Arsenal fans are very upset with me. I don’t know why. It’s not been any different for 20 years.”

Tyler is heard adding “they have been a bit intrusive. I’m sure it’s high spirits and the stewards are trying to do their job but they could have done it a bit better to be honest.”

“I quite like it to be fair,” laughs Neville. “I’m looking forward to going outside shortly and having a little bit of banter with them,” he adds, before getting back into his flow.

It’s no surprise that Neville is unpopular with Gunners fans, given that he was a key figure in the club’s intense rivalry with United during the 1990s and 2000s. His standing in North London hasn’t improved this season, as he has repeatedly stated that Man City will end up as Premier League champions, despite Arsenal’s lead at the top of the table.

Just last week on his podcast, Neville said that he still feels that even United will finish above Arsenal, although a draw against Crystal Palace midweek and the defeat at the Emirates on Sunday makes that look increasingly unlikely.

Frank Lampard expected to be sacked by Everton today