It appears clear to all that Luke Shaw does not have a long-term future at Manchester United under Jose Mourinho, writes Diarmuid O’Neill.

Alas, this is not the first time Mourinho has dealt a blow to Shaw. His criticism of the pacey full-back has been based on physical, mental and tactical points.

In September 2016, Shaw was singled out by Mourinho after a poor United display against Watford.

“Today for the second goal, (Nordin) Amrabat is on the right side, and our left back is 25 metres distance from him, instead of five metres. But even at 25 metres, then you have to jump and go press. But no, we wait.”

Many United players that day had poor performances including captain Wayne Rooney in particular but it was Shaw who garnered Mourinho’s anger.

In November 2016, Mourinho criticised players who did not feature against Swansea City.

“There is a difference between the brave, who want to be there at any cost, and the ones for who a little pain can make a difference.

“If I were to speak with the many great football people of this team, they will say many times they played without being 100 per cent. For the team you have to do anything. That is my way of seeing.”

Shaw’s injury was in relation to his previously shattered leg, therefore this criticism seemed over the top.

In February 2017, Mourinho commented on what he wants in his defender’s qualities. Shaw was an unused substitute against Blackburn Rovers in the F.A. Cup that day.

“He has had a couple of small injuries this season and needs to adapt. He knows what I like in a defender, he knows that I like stability, that I don’t like mistakes, that for me it is to trust a player totally and he has to work to get it.

It seemed near impossible for Shaw to find consistency last season with his lack of game time.

Later that month, Shaw was left out in the Europa League with damning comments continuing.

“Because I am playing with Daley Blind with Marcos Rojo, with Matteo Darmian and all of them are playing the way I like a full-back to play.

“Luke has to wait for his chance and work better knowing that I give nothing for free.

None of the players mentioned above were bought as left backs. This would leave any natural left back questioning their own future.

After a draw with West Brom in April 2017, Mourinho gave a further stellar indication of where Shaw ranked in his left back options.

“It’s difficult for him to be on the bench because I cannot compare him with Ashley Young, with Darmian, with (Daley) Blind.

“I cannot compare the way he trains, the way he way he commits, the focus, the ambition. He is a long way behind.

Although we can’t see Shaw in training, he has impressed United fans when in the team and offers more than those mentioned above. His athleticism and ability to move from attack to defence cannot be competed with in this position.

After another draw with Everton in April, Mourinho claimed a good substitute performance by Shaw was down to his closeness to the left back on the touchline.

“He [Shaw] had a good performance but it was his body with my brain,” said Mourinho. “He was in front of me and I was making every decision for him.

“The communication was possible because we were very close. I was thinking for him, when to close inside, when to open, when to press the opponent, I was making every decision for him.”

This was a clear chance to praise Shaw in the media. Instead, Mourinho looked to quench any calls for his future inclusion. His comments continued to dismay pundits and fans alike. 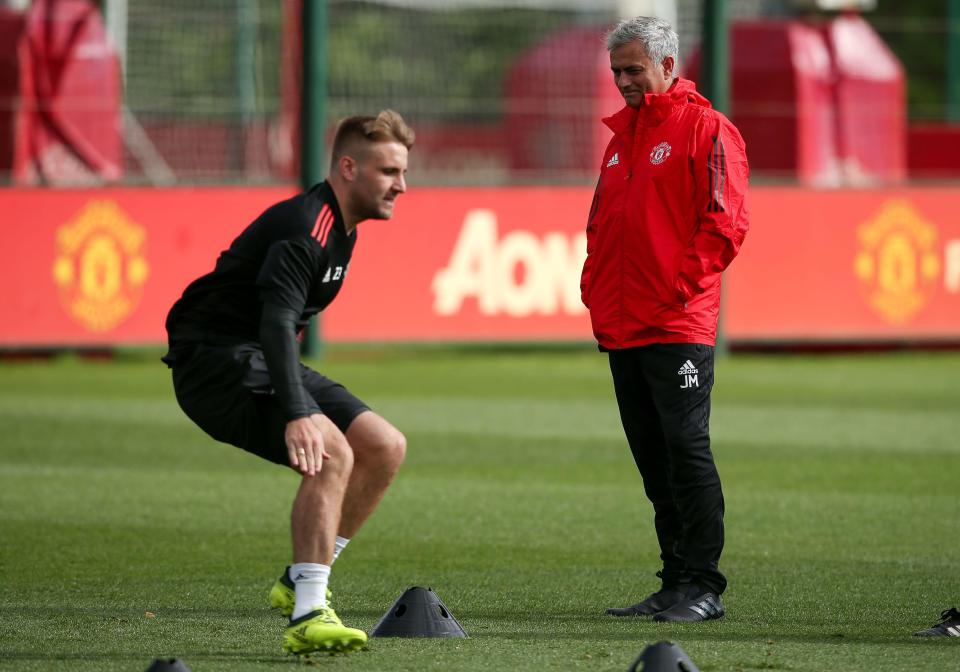 This season, Shaw’s relationship with his manager has been more of the same.

Mourinho recently praised Shaw in January after a significant role in the side with Ashley Young absent. It seemed as if the Portuguese had finally placed his faith in Shaw and that his run in the side would continue.

“And now with a good run of matches and continuity also, playing like he did against Everton, two days after a previous match, he’s good, solid, physically much better, mentally much stronger, tactically understanding the game much better and what we need in different phases and circumstances.

“I’m really happy and [looking at the transfer market], I can say that in this moment I don’t see many left-backs better than this Luke Shaw.”

Mourinho tends to single out and criticise players and then expect them to perform when they come back into the side out of necessity. This praise for Shaw seemed a turning point in his views of the England international.

However, this change of tune has quickly reversed with Shaw out of the side again. Shaw had another chance to impress but was whipped off at half-time in Saturday’s game with Brighton. Mourinho commented on the substitution.

“I wanted to defend better, I want my defensive line to be more solid in relation to a few, not many.”

Ashley Young came on and did no more than Shaw in the first half. However, it looks at this point as if Shaw will never gain Mourinho’s full confidence, opening the door for a move in the summer.

A swap deal with Tottenham Hotspur for Danny Rose may be the best option for all parties.