Here’s everything you need to know ahead of the international friendly between the Republic of Ireland and Qatar on Tuesday night.

The Republic of Ireland take on Qatar in an international friendly on Tuesday night in Hungary. Stephen Kenny will be hoping to register his first win as Ireland boss in his 11th game in charge. Here is everything you need to know about the match, including team news and TV channel details.

Who are Ireland playing against?

The Republic of Ireland are taking on 2022 FIFA World Cup hosts Qatar who are currently ranked 58th in the world.

Qatar have been invited by UEFA to join Ireland’s World Cup qualifying group to play friendlies against each team – home and away – in the build-up to the 2022 tournament.

This is Qatar’s ‘home’ fixture against Ireland but it is being held in the Nagyerdei Stadion in Debrecen, Hungary.

What is Ireland’s form going into the game against Qatar?

Ireland are on a terrible run of results and have yet to win a game during Stephen Kenny’s time in charge.

They have drawn four and lost six under the former Dundalk manager. So, while only being a friendly, it is vital that Ireland get a positive result on Tuesday night.

The national team haven’t won a game since November 2019 when they beat New Zealand 3-1 in a friendly in Dublin.

There were positive signs in Ireland’s 3-2 defeat to Serbia but Saturday night’s 1-0 reversal to Luxembourg has compounded leave Ireland’s awful run of form.

How can I watch the Ireland-Qatar match on TV?

The Qatar v Ireland match will be shown live on terrestrial television in Ireland.

RTÈ 2 will broadcast the game and coverage begins at 7 pm, with kick-off at 7:45 pm. The match will also be available to stream on RTÉ Player.

If living outside of Ireland – or in Ireland but would prefer to watch it on Sky Sports – you can watch the game on Sky Sports Football. Their coverage begins at 7:40 pm.

Who is in the Ireland squad?

Kenny named a 29-man squad for Ireland’s games this month. The former Dundalk boss is without key players such as John Egan and Darren Randolph – who are injured – while David McGoldrick has decided to retire from international duty.

Since the squad was announced, Caoimhin Kelleher, Conor Hourihane, Kevin Long and Callum O’Dowda were all ruled out through injury.

Aaron Connolly has also been forced to withdraw from the squad due to an injury against Serbia.

Matt Doherty and Enda Stevens will sit out the game against Qatar as they picked up slight knocks in Ireland’s 1-0 home defeat to Luxembourg.

What is Ireland’s starting XI for the international friendly against Qatar?

Stephen Kenny named his team an hour before kick-off in Hungary. 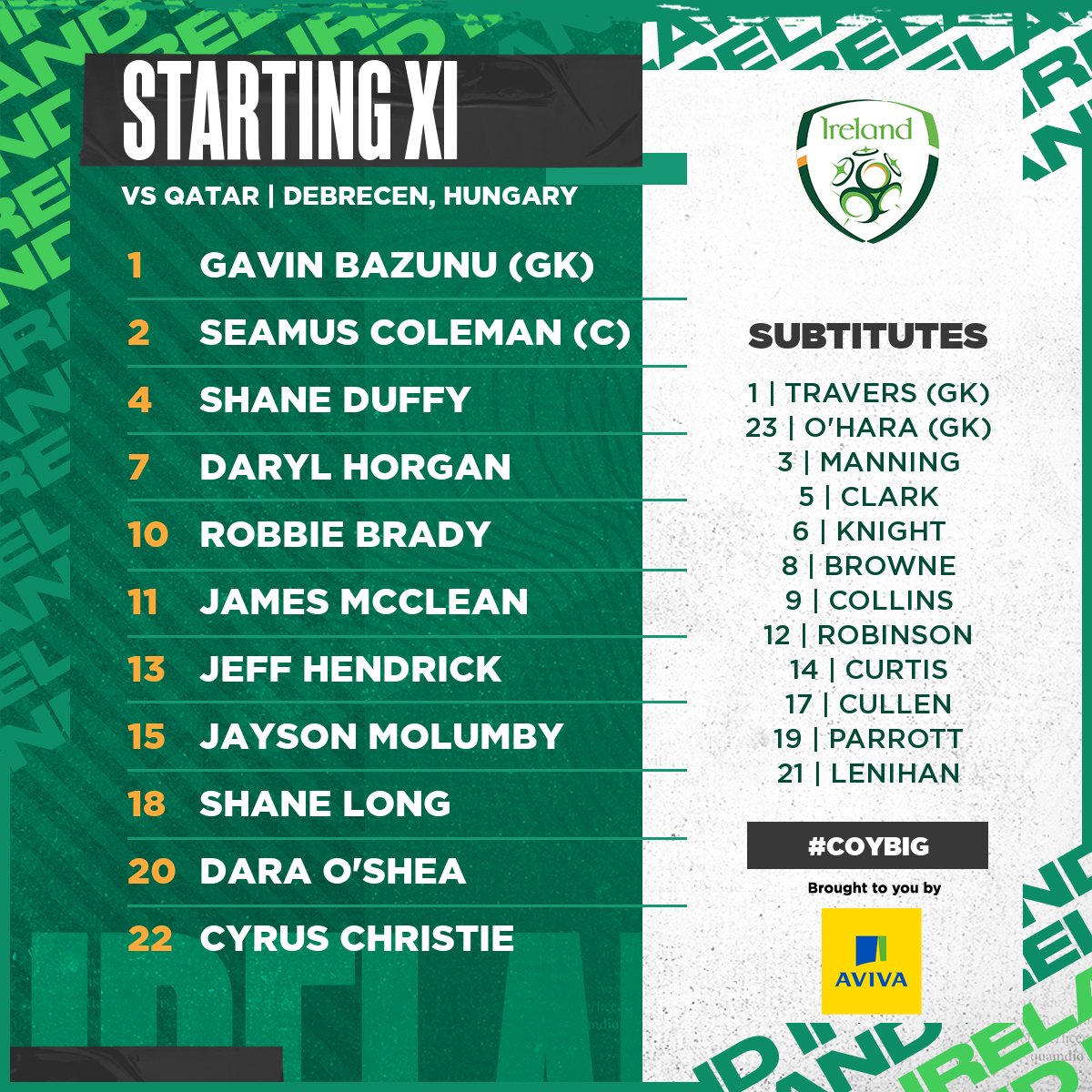