during the Premier League match between West Bromwich Albion and Tottenham Hotspur at The Hawthorns on May 5, 2018 in West Bromwich, England.

The equation for the Baggies today was simple – defeat Tottenham or seal their fate as a Championship team next season.

Stoke City confirmed their relegation earlier in the day with a 2-1 loss to Crystal Palace, so the gravity of the situation was deep in the minds of the players as they lined out against Mauricio Pochettino’s men.

West Brom had their fair share of chances during the game, while holding off the influential Christian Eriksen at the other end, but as the tie reached added time, they looked destined for relegation. 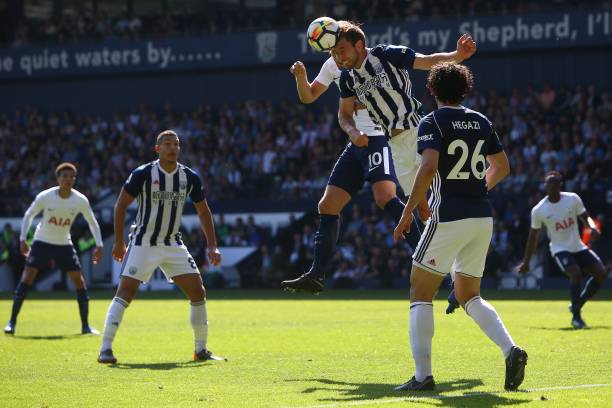 The midfielder scored his first goal of the season last month – a crucial strike in a 2-2 fightback against Liverpool. His next one was even bigger.

In added time, Craig Dawson headed the ball down into the ground, which was blocked unknowingly by Danny Rose. The resulting panic saw Rose and Livermore between them fight for the ball, which eventually found its way over the line to raucous scenes.

From great escapes to their eighth place finish in 2013, their latest spell in the Premier League has been a rollercoaster ride. This season in particular has been a microcosm of that chaos.

Long-time (yes, three years counts nowadays) manager Tony Pulis was sacked due to poor results in November of last year and was replaced by Alan Pardew. Pardew however, only managed one win in eighteen Premier League matches, and left the club by mutual consent last month.

Darren Moore stepped in as caretaker manager, and has managed a fantastic three wins two draws in his brief tenure.

West Brom must defeat Crystal Palace next weekend, and hope that Swansea and Southampton draw when they play in midweek, and then lose their remaining games.